Bear with me – this will probably be a difficult, rambley post. I looked at the save date on my original draft and I started this on January 2nd, 2018. . . Procrastination much?

So – I want to talk about two things that basically go hand-in-hand for me. Mental Health and Weight. I understand that this isn’t the case for everyone, but it is for a lot of people and I am one of them.

First of all watch this video:

I danced to segments from it in college and so did one of my classmates who was tremendously talented. – Shane Koyczan is a spoken word poet and he does amazing work.

I don’t want to get deep into bullying necessarily; because that could be a whole entire other post, and probably will be at some point.

Ya know – I was born a ginger and still lived in a time when it was okay to pick on the ginger kid. I was skin and bones as a child and once puberty hit I was chubby; mind you I wasn’t actually that big, but I had probably 30 pounds on my peers. I went out for choir and band and drama. . . art class. . . speech and debate. . .  <— the all encompassing misfits club. The cool kids in my school played sports and were quite mean to the “weirdos”. Stereotypical as that sounds, it was very true for my small High School. Today it’s not so much the case.

So – I’m not doing a very good job of explaining that these outside influences, though they shouldn’t, have had a huge impact on my mental health as an impressionable, young human. I got a bit defiant in some ways, but that was more like trying to prove to the world that I don’t need their approval and prove to myself that I’m not like all of the Stepford children. . . But this did have a significant impact on how I saw myself and what I thought I could do.

When I graduated High School I weighed about 165 pounds. I am 5’5 on the button and I am very large chested.

(Which has been a struggle for me ever since I started developing breasts. It’s no fun to not be able to wear the pretty bras, 12 year old girls don’t understand the reason behind why boys are so mean to girls with larger breasts, I have severe grooves in my shoulders from my bra straps, and I get terrible shoulder, back, and neck pain from it. Not to mention the fact that I used to get in trouble at work and school a LOT for showing too much cleavage. Honestly? I’ve given up on caring about that aspect because I would have cleavage in a turtle neck ((something my older brother never fails to point out when someone sneakily posts a picture of me on social media)). – Oh and I always have to wear two bras. Woo. . . )

(I told you this was rambley. . .) Back to after high school. So I weighed about 165 pounds and was convinced I was obese because I had gone to a doctor’s appointment, for birth control, I believe, and after my check up the doctor brought me into his office and basically told me I was obese and for my height I should not weight more than 120 pounds. I had a little weight on me, but I was NOT obese, I know that now. (BMI bothers me because it doesn’t account for the fact that I have 30 pounds of boob weight, thank you very much.) So – when I was done with school I had moved to Wisconsin and for the first three months I wasn’t able to find work. I starved myself, believing that I was too fat and I was too young to be this fat, et cetera, et cetera. This led to a horrible cycle of not eating and then being SO hungry and breaking down and eating everything in the fridge. Then I’d be depressed because I couldn’t beat the cycle and lay around feeling sorry for myself and eating everything in sight. SO I quickly gained a lot of weight and by the time I moved back to Wyoming a few years later I was about 215 pounds.

My sister (loving as she is, doesn’t understand that it’s hurtful the way she talks about it) sometimes tries to reiterate my point when I talk about that weight gain in a pretty negative light. (Again, I’m aware you didn’t mean any harm, sis! That’s why I’ve never brought it up.) But I still have a mental block about that initial balloon and how I could have/should have been different about my self care.

So I move back home to go to college with my brother and sister and get a summer job flagging for road construction. The heat and the work caused me to drop back down to about 185 pounds in a few weeks, no problem. Eventually I start taking dance classes and realize I really enjoyed this. But – I was a few years older than my classmates and a good 60-80 pounds bigger – because of all of the crap in my head that led me to believe that you can’t succeed if you’re fat, especially if you’re trying to do something like dance, I ended up dropping out of school. (Which led me to becoming a bartender and that was a very good thing for my confidence and understanding of the real world). So I’m be-bopping along, maintaining a good 170 pound weight and I end up moving in with a guy who was a hot mess, which led me to be a hot mess as well, and I gave up working out and running and vegetarian eating and ballooned back up to 220 pounds.

Once that relationship ended, I ended up in the most regretful, idiotic, waste-of-time relationship I’d ever been in. And added good 20 pounds or so to that weight. So here I am. The FATTEST I’ve been in my life. 240-250 pounds, trying to figure my life out once again. 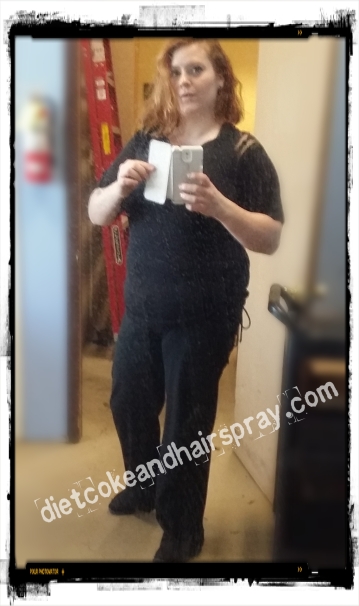 I knew I was facing some severe depression towards the end of this relationship so I decided what was important was that I go back to school. But what should I go for? Having no idea, I decided to just finish my dance degree and go from there.

Well – I didn’t finish that degree, but I made it most of the way through. STILL fighting myself the entire time and holding myself back because I let this “I’m too fat to succeed” mentality torture me. One thing I actively did, however, was go back to my vegetarian diet, be very conscious of what I put in my body, and worked out outside of my 10+ hours of dancing a day.

Then I had a big life event and tragedy that I’m not ready to speak about yet happen, and BOOM! Here I am two-and-a-half years later and I’m – you guessed it – 215 pounds.

Okay – let’s back up this thought process a little bit. Over the last year (and really about 3 years) I have been on a seriously mental roller coaster. One could say it’s because of the outside forces in my life, but the reality of that situation is that I am choosing to allow those things to happen. Because of all of this my depression had become this wretched evil leech and really sucked a lot of my spark and personality out of me.

About a year-and-a-half ago I was working an extremely part-time job (not only this job) cleaning a club and I remember thinking some suicidal thoughts while I was vacuuming. It’d been quite a while since I let that happen, BUT, I was in a good enough place that I knew I didn’t want to deal with that again so I immediately called my doctor and made an appointment. (Very difficult for me to do because I had a therapist when I was about 19 who was judgmental and belittling of depression and all that goes with it.)

I have said before that I do not like to take pills. I am serious. I don’t. So this doctor threw around the word bipolar. I agreed to be put on a bipolar medication (can’t remember what it’s called at this point, but nothing crazy like lithium – yet they all make you gain weight) and an anti-anxiety medication. AND I took these for about 7 months before abandoning them. I’m not bipolar. I’m just not, and I saw no difference in my mental state, so I didn’t want to continue to put that garbage in my body. So I quit. – The true remedy is all about inner love and care and a way you wouldn’t think and I will blog about that at a later time.

One thing I am grateful for at the moment is that my dude, shortcomings that he does have, has never ever made me feel anything less than attractive to him regardless of what size I am.

But this beast is already very long and I haven’t even gotten to the good bits!

Okay here’s the deal – I don’t know why but my brain wants me to start things on the 1st , or Monday, or New Year’s. Maybe it’s because I was born on a Monday. . . Thanks Mom. xoxo

Here’s where it gets serious. I’m going to post some pictures and you’re going to be nothing but nice if you have something to say, or you’re going to be blocked. I don’t need that hate, and I clearly have more courage than you do if I’m willing to post these pictures (and information) for God and everyone to see. So don’t hate. I’m doing a good thing here and I would hope that if you can’t be supportive that you had a good mom who taught you that if you can’t say anything nice, keep your damned mouth shut. <3<3<3

Goals and rewards! A reward system is not a bad plan, and can be motivational – therefore I told myself this: I can get a tattoo when I lose 20 pounds. I can get hair extensions when I lose 40 pounds (clip in). After that I’ll re-evaluate.

Diet? – All things in moderation, slowly move towards my vegetarian/ethical eating/whole foods diet again. Possibly vegan at some point?

Exercise? – Right now I’ve committed myself to 20-30 minutes every evening on the treadmill. Also – I’m going to try to start walking on my lunch break and get back into yoga. I have a friend with whom I’ve decided to go to a Zumba class on Mondays, but I think it’s been a month since we made that decision and have yet to go. 😦

Please also check out the blog I do with my mother and brother: fatfamilyfitness and give them love and support, too! I’ll post different updates there as well!

Please tell me what you’re doing to better your mental well-being and if you’re undergoing a weight loss journey! OR if you already have, what worked for you?? Comment below!

This site uses Akismet to reduce spam. Learn how your comment data is processed.